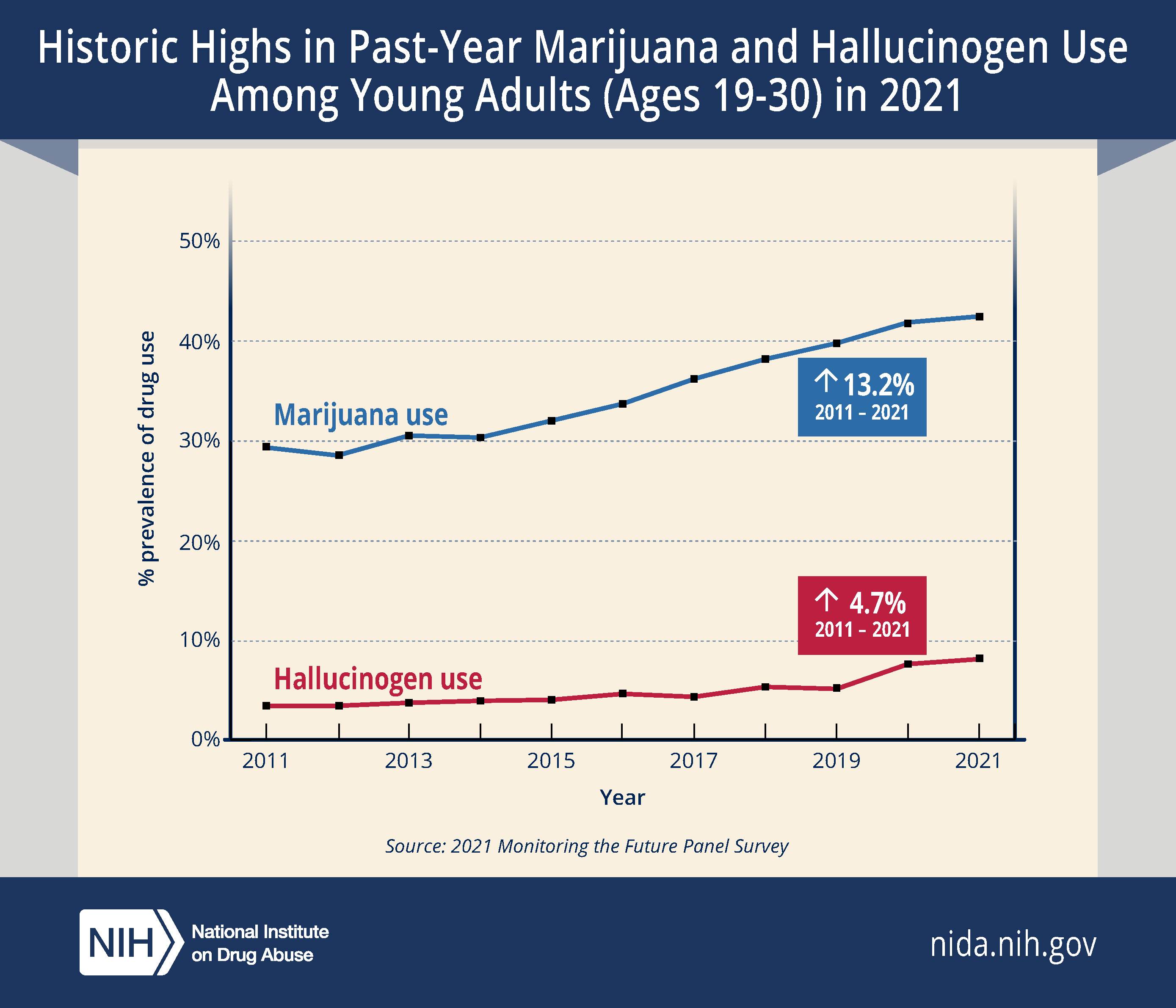 NIDA
Marijuana and hallucinogen use in the past year reported by young adults 19 to 30 years old increased significantly in 2021 compared to five and 10 years ago, reaching historic highs in this age group since 1988, according to the Monitoring the Future (MTF) panel study. Rates of past-month nicotine vaping, which have been gradually increasing in young adults for the past four years, also continued their general upward trend in 2021, despite leveling off in 2020. Past-month marijuana vaping, which had significantly decreased in 2020, rebounded to pre-pandemic levels in 2021.

“As the drug landscape shifts over time, this data provides a window into the substances and patterns of use favored by young adults. We need to know more about how young adults are using drugs like marijuana and hallucinogens, and the health effects that result from consuming different potencies and forms of these substances,” said National Institute on Drug Abuse Director Nora Volkow, M.D. “Young adults are in a critical life stage and honing their ability to make informed choices. Understanding how substance use can impact the formative choices in young adulthood is critical to help position the new generations for success.”

Since 1975, the Monitoring the Future study has annually surveyed substance use behaviors and attitudes among a nationally representative sample of teens. A longitudinal panel study component of MTF conducts follow-up surveys on a subset of these participants to track their drug use through adulthood. Participants self-report their drug use behaviors across three primary time periods – lifetime, past year (12 months), and past month (30 days). The MTF study is conducted by scientists at the University of Michigan’s Institute for Social Research, Ann Arbor, and is funded by NIDA, part of the National Institutes of Health.

Data for the 2021 survey were collected online from April 2021 through October 2021. Key findings in the young adult group include:

Vaping: Nicotine vaping in the past month increased significantly among young adults in 2021 despite leveling off in 2020 during the earlier part of the pandemic. The continued increase in 2021 reflects a general long-term upward trend: in 2021, nicotine vaping prevalence nearly tripled to 16% compared to 6% in 2017, when the behavior was first recorded.

Prevalence of marijuana vaping in the past month among young adults had significantly dipped in 2020 but returned to near pre-pandemic levels in 2021. Since 2017, when marijuana vaping was included in this study, past-month prevalence has doubled – from 6% in 2017 to 12% in 2021.

The study also showed significant decreases in past-month cigarette smoking by young adults and non-medical use of opioid medications in the past year (surveyed as “narcotics other than heroin”) compared to 10 years ago. Both substances have been declining steadily in use for the past decade. Additional data from the 2021 MTF panel study include drug use reported by adults 35 to 50 years old, college/non-college young adults, and among various demographic subgroups.

“One of the best ways we can learn more about drug use and its impact on people is to observe which drugs are appearing, in which populations, for how long, and under which contexts,” said Megan Patrick, Ph.D., a research professor at the University of Michigan and principal investigator of the MTF panel study. “Monitoring the Future and similar large-scale surveys on a consistent sample population allow us to assess the effects of ‘natural experiments’ like the pandemic. We can examine how and why drugs are used and highlight critical areas to guide where the research should go next and to inform public health interventions.”

View more information on the methods behind MTF panel study data collection and how the survey adjusts for the effects of potential exclusions in the report.

Results from the related 2021 MTF study of substance use behaviors and related attitudes among teens in the United States was released in December 2021, and 2022 results are upcoming in December 2022.

For more information on substance and mental health treatment programs in your area, call the free and confidential National Helpline 1-800-662-HELP (4357) or visit www.FindTreatment.gov.

About the National Institute on Drug Abuse (NIDA): NIDA is a component of the National Institutes of Health, U.S. Department of Health and Human Services. NIDA supports most of the world’s research on the health aspects of drug use and addiction. The Institute carries out a large variety of programs to inform policy, improve practice, and advance addiction science. For more information about NIDA and its programs, visit https://www.nida.nih.gov/.

About the National Institutes of Health (NIH): NIH, the nation’s medical research agency, includes 27 Institutes and Centers and is a component of the U.S. Department of Health and Human Services. NIH is the primary federal agency conducting and supporting basic, clinical, and translational medical research, and is investigating the causes, treatments, and cures for both common and rare diseases. For more information about NIH and its programs, visit https://www.nih.gov/.